Here’s another #ThrowbackThursday Epic Event to give you inspiration for your own party planning adventures—especially if the theme is “Danger.” 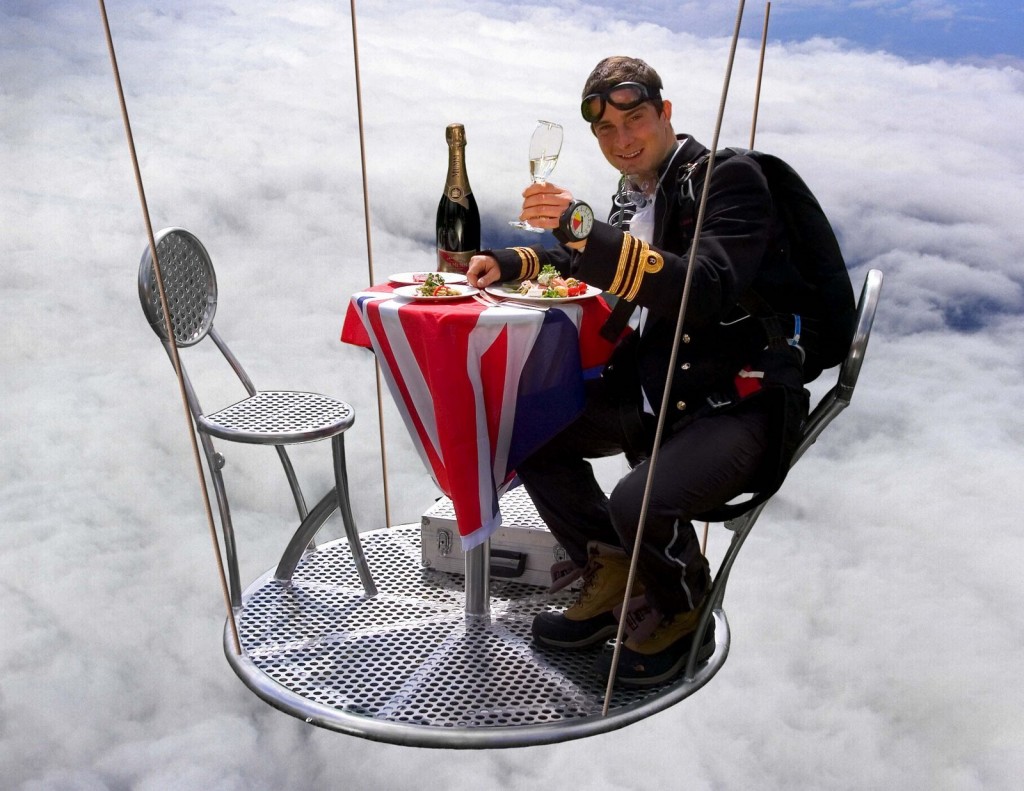 To achieve the record, the intrepid trio ascended in a specially-designed and built hot-air balloon, piloted by Hempleman-Adams, and as they approached the record altitude, Grylls and Veal—donning formal dress and oxygen masks—abseiled 40 feet from the balloon basket to a specially laid formal dinner table suspended below.

They enjoyed a three-course spread featuring asparagus tips, duck a l’orange and fruit terrine, eaten on paper plates in a cozy atmosphere of -49 degrees Fahrenheit. This was followed by a salute to the Queen of England and a high-altitude sky-dive back to earth. In all, the meal lasted twenty minutes.

The only failure of the mission, according to Hempleman-Adams, was that “the other two members of the team ate all the food so there was nothing left when I landed.”

For those unaware of Bear Grylls, he is the presented of the British-born tv show Man vs Wild, as well as being one of the youngest climbers to reach the summit of Mount Everest in 1997, at age 22. His reputation often surrounded by controversy, particularly from outdoor enthusiasts who question the authenticity of challenges filmed for his television show, Grylls always manages to make a splash, with feats like flying a parajet over the Himalayas and taking an inflatable boat through the Northwest Passage.

His dinner companions are no slouches either, with Hempleman-Adams the first Brit to walk solo and unsupported to the South Pole, and the first man to fly a balloon over the North Pole, and Lt Commander Alan Veal the leader of the British Royal Navy Freefall Parachute Display Team.

If you’re planning your next dinner party, check out the cool features of the SquadUP app that can help you out—from organizing invites to budgeting the meal to pooling photos and other content from the night itself. Download it free to get your party started!